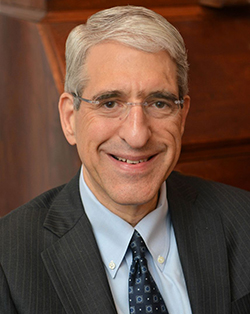 Peter Salovey is the twenty-third president of Yale University and the Chris Argyris Professor of Psychology. He holds secondary faculty appointments in the School of Management, the School of Public Health, the Institution for Social and Policy Studies, and the Sociology Department. He became president of the university in July 2013.

President Salovey has led the development of new programs and facilities across the schools and departments of Yale, consistent with the vision and strategy he articulated earlier in his presidency. Advancements include restructuring and expanding the Faculty of Arts and Sciences and the School of Engineering and Applied Science, launching the Jackson School of Global Affairs, transitioning Yale School of Public Health into a self-supporting independent school from the Yale School of Medicine, and opening two new residential colleges, increasing Yale College enrollment by 15 percent. He is advancing innovative teaching on campus; amplifying Yale’s partnerships in Africa, Asia, and other parts of the world; and enhancing multidisciplinary collaboration and entrepreneurial opportunity for faculty and students. President Salovey is committed to improving access to a Yale education for students worldwide regardless of their financial background.

Prior to becoming president, President Salovey served as the provost of Yale University from 2008 to 2013. As provost, he facilitated strategic planning and initiatives such as enhancing career development and mentoring opportunities for all Yale faculty members; promoting faculty diversity; creating the Office of Academic Integrity; establishing the University-wide Committee on Sexual Misconduct; developing the West Campus; and overseeing the university’s budget during the global financial crisis. Other leadership roles at Yale have included serving as chair of the Department of Psychology, dean of the Graduate School of Arts and Sciences, and dean of Yale College.

After receiving an A.B. (psychology) and A.M. (sociology) from Stanford University in 1980 with departmental honors and university distinction, President Salovey earned three degrees at Yale in psychology: M.S. (1983), M.Phil. (1984), and Ph.D. (1986). Since joining the Yale faculty in 1986, he has studied the connections among emotion, health communication, and health behavior, with a special focus on emotional intelligence. He played key roles in multiple Yale programs including the Health, Emotion, and Behavior Laboratory, which President Salovey founded; the Center for Interdisciplinary Research on AIDS; and the Cancer Prevention and Control Research Program.

President Salovey has authored or edited over a dozen books translated into eleven languages and published hundreds of journal articles and essays. With John D. Mayer, he developed a broad framework called “emotional intelligence,” the theory that just as people have a wide range of intellectual abilities, they also have a wide range of measurable emotional skills that profoundly affect their thinking and action.

President Salovey and his wife, Marta Elisa Moret, have lived in New Haven since they arrived as graduate students more than thirty years ago. Ms. Moret, a 1984 graduate of the Yale School of Public Health, is the president of Urban Policy Strategies, LLC, which provides program evaluation and technical assistance to community-based health organizations. Ms. Moret is also active with the Association of Yale Alumni and has served on its board of governors. She previously held positions in the Edward Zigler Center in Child Development and Social Policy, the Community Foundation for Greater New Haven, and the Hispanic Health Council. Ms. Moret was the deputy commissioner for the Connecticut Department of Social Services from 1991 to 1994. She currently serves on the boards of the New Alliance Foundation and Story Corps, and she chairs the board of the Campaign School at Yale. Ms. Moret was named to the Winslow Centennial Honor Roll for Excellence and Service of the Yale School of Public Health in 2015, received the Alexis de Tocqueville Herbert H. Pearce Award from the United Way of Greater New Haven in 2019, and was awarded the Junior Achievement of Southwest New England’s Spirit of Hope Award winner in 2020.