Last week on New Year’s Day, Bruce Alexander, Marta, and I were privileged to attend the inauguration of the new team in New Haven’s City Hall. We applauded as Toni Harp took the oath of office as New Haven’s fiftieth mayor—the first woman and the second African American to be elected since New Haven was first incorporated in 1784. We enjoyed, as well, seeing so many Yale-affiliated representatives among the thirty alders who were also sworn in at this ceremony at Career High School. 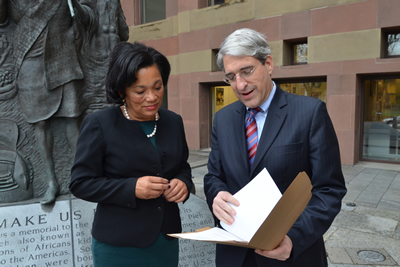 Mayor Harp’s inspiring inaugural address began with a note of gratitude for former Mayor John DeStefano’s twenty years in office, and Yale received a “shout out” in her remark that a new mayor, university president, and superintendent of schools—all of whom are Yale graduates—were beginning their terms following long-serving and highly successful predecessors. Mayor Harp feels that this moment represents an opportunity to take our town-gown partnership to the next level. I agree!

Mayor Harp addressed several themes in her inaugural address that are mutual goals for us:  encouraging a resurgence of New Haven’s economy and the creation of new jobs; ensuring that New Haven is an enjoyable, livable, and safe city through effective community policing; improving the health of residents by creating school-based health centers with a focus on healthy eating and physical exercise; developing new public school programs with a special emphasis on foreign languages, cultural sensitivity, and STEM education to create future citizens of the world. The mayor concluded her remarks with a celebration of New Haven as a hub for the arts, history, and culture.

I very much look forward to collaborating closely with our new mayor. Our conversations so far have been quite promising, and, as the accompanying photograph suggests, we share a love for the joint history of the city and university.

I hope your holiday break has been similarly inspiring, and on behalf of everyone in Woodbridge Hall, I wish you a happy new year!